Acne is generally regarded as a 'teen problem', something people grow out of as they hit their late teens or early twenties. 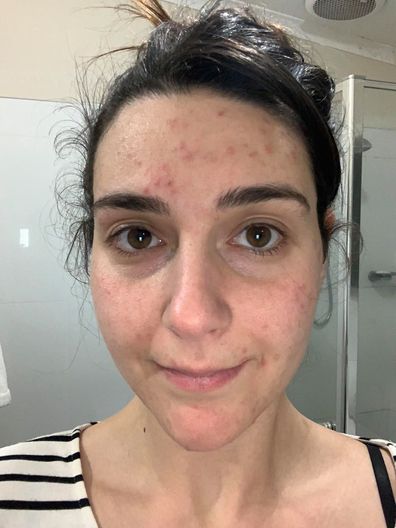 But the truth is adult acne affects thousands of Aussies all over the country, including women like Adrianna Vanni, 28, whose acne cropped up well after she graduated.

"I never actually had acne in high school, I'm definitely an adult acne girl," Adrianna tells 9Honey over the phone.

"I hit about 23 and pimples just started showing up everywhere. I don't know if it was because I was wearing more makeup, or drinking alcohol, I have no idea – but the last five years have been insane."

Like most people who struggle with adult acne, Adrianna tried "everything" to rid her face of painful pimples.

Medication worked for a while, but the second she went off it the acne would return, and over-the-counter face washes and scrubs just dried her skin out.

Even changing her diet didn't seem to work and eventually Adrianna got fed up with constantly trying new remedies.

"I just gave up for a little while and thought 'maybe I'll grow out of it'," she says, but the acne stuck around even then.

People told her to drink more water and touch her face less, but nothing Adrianna did or didn't do seemed to have any effect on her skin.

Eventually she decided that if external remedies couldn't solve her skin woes, something that "worked on the inside" might be the way to go.

Adrianna started looking into natural detoxes that might help clear her acne and eventually stumbled across Wednesday Cleanse Day, a "natural super cleanse and beauty boost brand" according to the website.

It sells drink sachets that "supports a one-day cleanse, a three-day cleanse and ongoing intermittent fasting" the site adds.

The tonic drink isn't a meal replacement, but claims to help with weight loss and other lifestyle and beauty goals.

"The ad [for the brand] came up on Instagram and I'm a sucker for packaging, so I clicked on it and had a look," Adrianna said, admitting the brand's Insta-worthy aesthetic pulled her in.

"It was an Australian-made, local, women [lead] business which I loved, and it had all the ingredients I was looking for."

After checking other women's' reviews of the brand's detoxes and trying a sample, Adrianna decided to order two products in a last-ditch bid to beat her acne.

The three-day 'event prep' pack would help her kickstart her cleanse, while the 28-day "transform and glow" product would carry her through a month of detoxing.

"I literally haven't been off it since," she confesses.

The first change Adrianna noticed was a boost in her energy, she claims, followed by her skin starting to clear up after two weeks on the cleanse.

By the time she had finished her first 28-day detox, her skin was looking better than it had in years and Adrianna was hooked.

"I literally went from a whole face of pimples to now, I get one or two a month," she says.

The first person who noticed the difference was her boyfriend, who couldn't believe she wasn't wearing makeup when he saw how clear her skin was.

"Whatever you're doing, keep going, it's amazing."

"He said, 'whatever you're doing, keep going, it's amazing'," she laughs of his reaction.

It helps that she started the detox during lockdown, so when she emerged friends and family were amazed by the drastic change in her skin – and her figure.

The Wednesday Cleanse Day program encourages intermittent fasting during its detoxes, and between that and some healthy lifestyle changes, Adrianna managed to lose seven kilos in six weeks.

Explaining the detox drink gave her more energy to be active, Adrianna also committed to intermittent fasting and making healthier food choices during her cleanse.

She swapped chicken nuggets for eggs and veggies at lunch, while her heavy, Italian dinners were traded in for chicken or fish with more veg.

As for snacks, out went the chocolate biscuits and ice cream and in came fruit and healthy crackers when the cravings hit.

"I just felt guilty ruining it [her progress] by going and eating chocolate or going and getting takeaway," she says.

Since she had spent money on the cleanse, she didn't want to sabotage any results by indulging in foods she knew could trigger her acne.

Though, she still finds time for Friday wines with her girlfriends.

Adding the detox isn't a quick fix, Adrianna says it helped her kickstart the lifestyle changes that totally changed her skin and body – for the better.

She also doesn't worry about "missing" a few days of the program here and there, because it's a sustainable addition to her daily life.

"It's been really, really helpful kickstarting that change," she says.

Though she's found amazing success with the detox, she encourages other women to always do their research when it comes to cleanses and similar products sold online.

"Check reviews from real people and try to find people who tried the product but weren't affiliated with them," she says, adding women should also check a product's ingredients.

Adrianna also made sure to clarify there's no one product that can clear up acne overnight, but committing to sustainable lifestyle changes and "natural products" can be the key to clearer skin.